The Best Cities for Taco Lovers

If you think Taco Tuesday is for amateurs, this list is for you. As you well know, tacos are for every day of the week — along with burritos, enchiladas, mole, tamales and all manner of Mexican specialties.

Think you know the cities where you’ll find the most Mexican restaurants per resident?

We’ll give you a hint — Los Angeles didn’t make our list, though California shows up strong with three entries on the top 10. In fact, with the exception of Florida, the highest density of Mexican restaurants is solidly west of the Mississippi.

From endless bowls of queso to carnitas worth waiting in line for, we did a little research to determine the best cities for taco lovers. What does that mean, exactly? These are the top 10 cities in the country with the most Mexican restaurants per person among cities with at least 100 Mexican restaurants and 100,000 people.

Anaheim isn’t just home to Disneyland, the Anaheim Ducks and The Angels. This Orange County city also boasts 151 Mexican restaurants, which makes up a grande 22 percent of the city’s total restaurants. The OC’s Mexican cuisine scene is strong, to say the least, and Anaheim is no slouch.

From tacos al pastor at local favorite Taqueria Los Gueros to carne asada at Sabrosa Mexican Grill, Anaheim has a lot to offer when it comes to authentic Mexican food that’s worth braving the busy 5 freeway for.

Ready to call OC home? Expect to pay about $1,830 for a one-bedroom apartment.

Colorado’s capital is more than just a jumping-off point for skiers looking to carve up the Rockies. There’s good reason people from all over the country are beelining to the Mile-High City in record number, what with the stunning natural beauty, a thriving economy and 300 days of sunshine a year.

Oh, and did we mention the tacos? With a whopping 309 Mexican restaurants, it’ll take you a few years to scour the city for your favorite fajitas. Start your tasty exploration with local favorites like La Loma’s Southwest-style Mexican cuisine (don’t miss the green chile and stuffed sopapillas), Benny’s for liters of margaritas and killer chimichangas, or just work your way down this list of the city’s 12 best taco spots.

If you’re ready to pack up and move to the mountains, budget for a one-bedroom apartment that’ll cost around $1,805.

The only Texas city that cracked our top 10 also boasts the highest number of Mexican restaurants. We dare you to sample the salsa at all 684 San Antonio outposts. Home of the Alamo and the festive River Walk flanking the San Antonio River, this Lone Star City boasts a rich Mexican heritage.

People of Mexican origin make up 91.3 percent of the city’s Hispanic Tejano population, which total more than 54 percent of the local population. What does that mean for you? You guessed it — ah-mazing Mexican cuisine. Expect Tex-Mex staples, mariachi music and delicious bakery delicacies like pan dulce (Mexican sweet bread).

You’ll find local landmarks like the 75+-year-old Mi Tierra Café to brand-new restaurants like Evo Contemporary Mexican Cuisine. It’s going to take a while to explore all of the excellent Mexican restaurants San Antonio has to offer, so you may as well move here. Fortunately, it’s affordable. A one-bedroom will set you back about $994 per month.

The University of Arizona and its nearly 45,000 students are a big part of Tucson. Good thing the co-eds are fans of Mexican food. Mexican restaurants account for nearly 20 percent of the dining scene here, which means you’ll find more tacos, tostadas and tortas than you can shake a handmade tortilla at.

Not sure where to start? Try the Cadillac margaritas and famous carne seca platter at El Charro Café or the crispy green chile torta at Seis Kitchen. From there, just follow your gut — or at least its grumbling.

If you’d like to live in a high desert valley surrounded by no fewer than four mountain ranges, consider a move to this Southwest city. The price tag? A reasonable $750 for a one-bedroom.

Located about 20 minutes inland from Huntington Beach (a.k.a. Surf City) and tony Newport Beach, the seat of Orange County has the highest ratio of Mexican restaurants on our top 10. Living in Santa Ana means that nearly 28 percent of all restaurants in your vicinity will be the kind where meals generally include chips, salsa and margaritas.

Good news for taco lovers! Santa Ana is home to 6 out of 10 of the best taco spots in Orange County — three of which are favorites for their Al Pastor (Taqueria Tapatia #2, Tacos Sinaloa, Taqueria el Zamorano). Like a taco with a little — or a whole lot — of heat? Don’t miss the chicken diablo taco at Taqueria Zamora.

If easy access to world-famous beaches plus a stacked selection of Mexican restaurants sounds like your speed, it may be time to start saving your pennies. A one-bedroom here will set you back $1,772.

Prefer your beaches with white sand and warm turquoise waters? One of only two cities to crack our list from outside the western half of the country is way down south in Miami. And beyond its renowned nightlife, art deco architecture and dreamy beaches, this South Florida city is well-known for its killer Mexican cuisine.

Sure, the city is celebrated for its Cuban food, but you’ll also find more than 200 Mexican restaurants in the mix. Start by sampling everything from fish tacos to a tortilla wrapped around fresh-grilled tongue at these 16 talked-about taco shops.

Need more time to try all of the city’s 218 outposts? Set up shop in a one-bedroom apartment here for around $1,963 a month.

Located about two hours north of Los Angeles, Bakersfield is famous for an influential genre of country music dating back to the 1950s made famous by Buck Owens and Merle Haggard. Today, the Bakersfield Sound is alive and well at Buck Owens’ Crystal Palace, a music venue and eatery where Mexican food makes only the briefest of appearances.

Fortunately, there are 184 places to eat around here where Mexican food is most definitely on the menu. From the beloved Nuestro Mexico restaurant with its chicken mole enchiladas and fried ice cream to street tacos at popular food trucks like Vatos Tacos, there’s a lot to love about the eats in this Central Valley City.

Better yet, rent is a relatively reasonable (for California) $998 per month for a one-bedroom.

If you’re like most people, Orlando makes you think theme park central. You’re not wrong, thanks to more than a dozen such parks running the gamut from Walt Disney World to Universal Studios’ Wizarding World of Harry Potter. Guess what else Orlando has a lot of? Yep, Mexican restaurants — 168 to be exact.

Suffice it to say, you’ll find what you’re looking for among Orlando’s spread of taco spots. From famed tamales and fantastic flan to restaurants built around booze (think tequila bars and mezcalerias), locals and tourists alike appreciate the variety found here in this tasty corner of Florida. And living here won’t break the bank. A one-bedroom will cost you around $1,359 per month.

A city associated with ample ski resorts, Salt Lake City also has a large proportion of Mexican restaurants for its relatively small population of 200,000. And, let’s be honest, what tastes better than a plate of tacos and fresh-made guacamole after hitting the slopes all day or hiking Utah’s Wasatch Mountains?

Considering calling Salt Lake home? A one-bedroom apartment here will cost you around $1,227 per month. 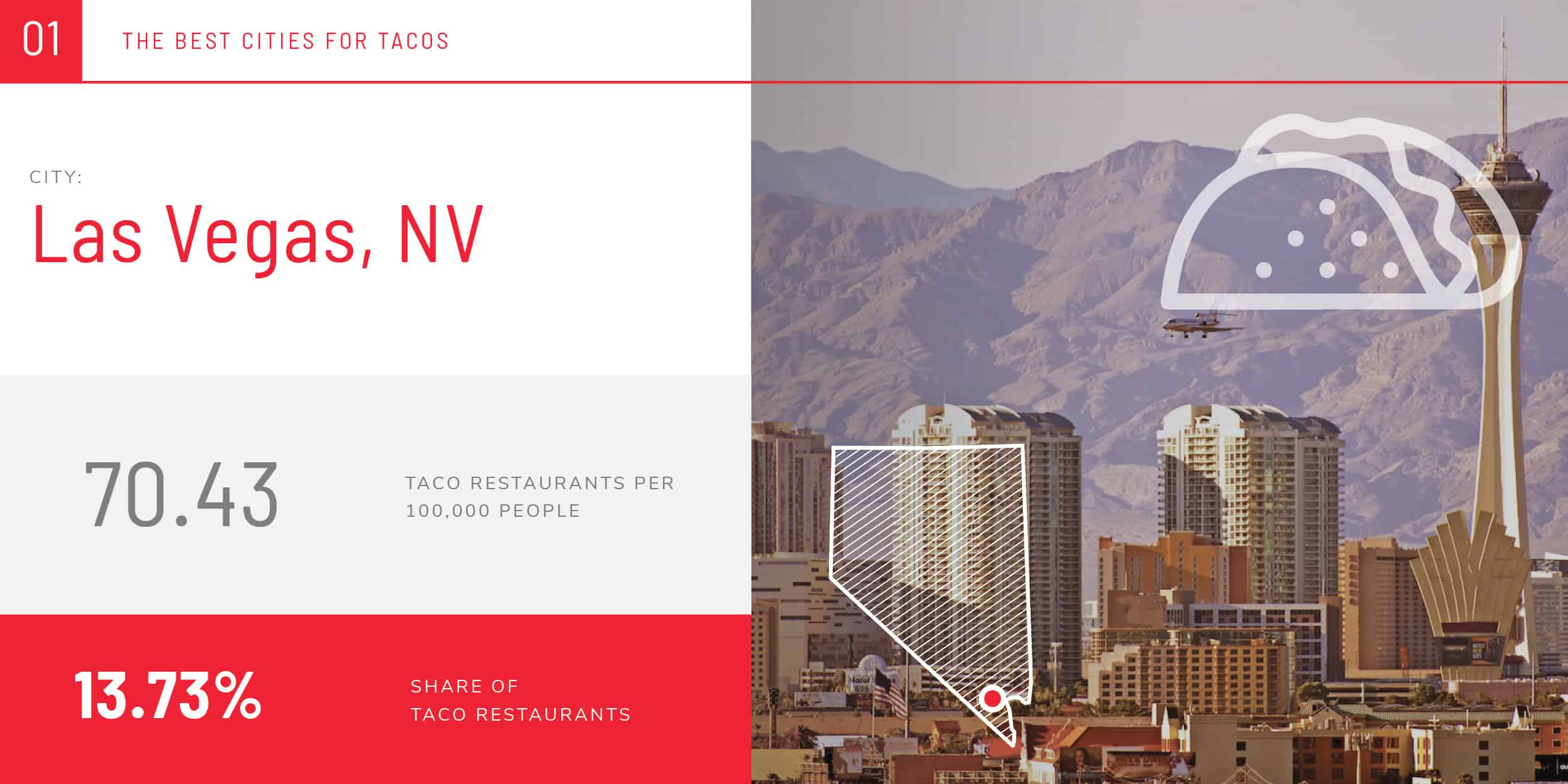 Surprised to see that Sin City is the country’s top spot for taco lovers? Consider that the Hispanic population of Las Vegas is booming, which means authentic Mexican food that can rival what you’ll find south of the border. You’ll enjoy no fewer than 454 Mexican restaurants here, and yes, most of the good ones can be found off of The Strip.

Sure, you’ll find favorites like Nacho Daddy and Tacos El Gordo in the heart of the action on the strip, but true taco lovers venture off the beaten path for guacamole made tableside at El Dorado Cantina or mole poblano enchiladas at Las Cazuelas.

If you’re ready to start your taco tour in Las Vegas, you can expect to pay $1,087 per month for a one-bedroom.

Want to cast a wider net to accommodate your taco cravings? The top 50 cities for taco lovers will give you some good options beyond the western half of the country, including a strong showing by the state of Texas.

Top 10 cities with the most taco restaurants

Maybe you’re just looking for a total number of options, regardless of population. Here are the 10 cities with the most Mexican restaurants in the U.S.

Our calculations may not reflect recent restaurant openings or closings.

The rent information included in this article is based on average December 2019 one-bedroom multifamily rental property unit inventory on Apartment Guide and Rent.com and is used for illustrative purposes only. The data contained herein do not constitute financial advice or a pricing guarantee for any apartment.